Switching power supplies have been widely used due to their high efficiency, low energy transmission loss, flexible output, and small footprint, which are incomparable to general linear power supplies. Nowadays, switching power supplies are almost invariably used for power supplies for large-scale electronic devices and household appliances. It is the high-efficiency, low-power power supply method that is currently unanimously recognized, but low power consumption. High-efficiency conversion (AC-DC) comes at a price. Switching power supplies will also cause a lot of troubles in practical applications, such as: EMC problems, power-on surge current problems. Under the condition of high voltage and high current, key components with high value are prone to frequent damage. The phenomenon of early failure causes premature damage to the entire power system, and electrical appliances or equipment cannot be used. This is one of the headaches for the majority of circuit designers, especially power supply design engineers. 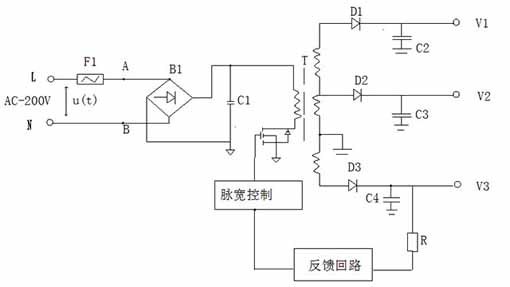 Today, let’s talk about the power-on surge current, what is going on? Figure 1 is the most basic original drawing of a switching power supply. Is it the same as the power drawing you are currently designing? Switching power supply directly converts the conversion process of AC-220V (50Hz) AC power on the power grid into a DC voltage that we can directly use. Very convenient and fast. The disadvantage is that under the fuse, B and C will often open for no reason, and the internal coil under the transformer will be overheated, and the internal short circuit will occur. Except the components themselves are not reliable. The occurrence of the above phenomenon is mostly related to excessive surge current and excessive impact. How can there be inrush current?

Even if it is a short time, it is generally MS level. When such a large current is applied to B1, C1 and T, it may not be damaged after a single boot, and it seems that it does not matter if it is turned on several times. But what is certain is that every time the machine is turned on, the relevant device is damaged once. Turning on and off the machine year after year, this is prone to problems.

The slow start and delay insurance designed by the engineers for this purpose have avoided some failures, but they cannot be completely eliminated. Statistics show that more than 60% of electrical equipment problems are in the power supply system.