Thermistors are sensitive components that are developed early, have many types, and are more mature. The thermistor is composed of a semiconducting ceramic material, and the principle of utilization is temperature-induced resistance change. If the electron and hole concentrations are n and p, respectively, and the mobility is μn, μp, then the conductance of the semiconductor is:
σ=q(nμn+pμp)
Because n, p, μn, and μp are all functions that depend on temperature T. Therefore, conductance is a function of temperature, the measurement may calculate the conductance of the high and low temperature, and can make the resistance - temperature characteristics. This is the working principle of semiconductor thermistor.

Due to the unique properties of the semiconductor thermistor, it can be used not only as a measuring component (such as measuring temperature, flow rate, liquid level, etc.). It can also be used as a control element (such as thermal switches, current limiters) and circuit compensation components. Thermistors are widely used in household appliances, power industry, communications, military science, aerospace and other fields, and the development prospects are extremely broad.


PTC thermistor
PTC (PosiTIve Temperature Coeff1Cient) is a thermistor phenomenon or material that has a sharp increase in resistance at a certain temperature and has a positive temperature coefficient. Can be used exclusively as a constant temperature sensor. This material is a sintered body mainly composed of BaTIO3 or SrTIO3 or PbTIO3. Incorporating a small amount of oxides such as Nb, Ta, Bi, Sb, Y, and La to control the valence and semi-conducting them, and the semiconductor-derived material such as BaTiO3 is often referred to as semi-conductive ceramics; At the same time, an oxide of Mn, Fe, Cu, Cr which increases its positive temperature coefficient of resistance and an additive which plays other roles are also added. The titanium oxide titanate or the like and its solid solution are semiconducting by a general ceramic process and high-temperature sintering to obtain a positive-acting thermistor material. The temperature coefficient and Curie point temperature vary with composition and sintering conditions (especially cooling temperature).

Barium titanate crystal belongs to a perovskite structure and is a ferroelectric material. Pure barium titanate is an insulating material. A trace amount of rare earth element is added to the barium titanate material, and after appropriate heat treatment, the resistivity is increased by several orders of magnitude near the Curie temperature, and a PTC effect is generated. This effect is related to the ferroelectricity of the BaTiO3 crystal and its phase transition in the material near the Curie temperature. Barium titanate semiconducting porcelain is a polycrystalline material with intergranular interfaces between the grains. When the semi-conductive porcelain reaches a certain temperature or voltage, the crystal grain boundary changes, and the resistance changes sharply.

The PTC effect of barium titanate semiconducting porcelain is caused by grain boundary (grain boundary). For conductive electrons, the intergranular interface is equivalent to a barrier. When the temperature is low, the electric resistance is easy to cross the barrier due to the electric field in the barium titanate, and the resistance value is small. When the temperature rises to near the Curie point temperature (ie, the critical temperature), the internal electric field is destroyed and it does not help the conductive electrons to cross the barrier. This is equivalent to an increase in the barrier and a sudden increase in the resistance value, resulting in a PTC effect. The physical model of the PTC effect of barium titanate semi-conducting porcelain is the sea-surface surface barrier model, the annihilation model of the Daniels et al. and the superimposed barrier model. They have a reasonable explanation of the PTC effect from different aspects.

The PTC effect originates from the nature of the grain boundary between the grain boundary and the grain boundary of the ceramic, and varies significantly depending on the type of impurity, concentration, sintering conditions, and the like. Recently, a practical temperature-sensitive resistor has a silicon temperature sensing element using a silicon wafer, which is a body type and high precision PTC thermistor. It consists of n-type silicon, and the electron scattering caused by the impurities increases with temperature, and the resistance increases.
The PTC thermistor appeared in 1950, and then in 1954, a PTC thermistor with barium titanate as the main material appeared. PTC thermistors are used in the industry for temperature measurement and control, as well as for temperature detection and regulation in certain parts of automobiles, and are also widely used in civilian equipment. For example, control the water temperature of the instant water heater, the temperature of the air conditioner and the cold storage, use the heating itself for gas analysis and the wind speed machine. The following is an example of the application of heating and overheat protection for appliances such as heaters, motors, transformers, and high-power transistors. 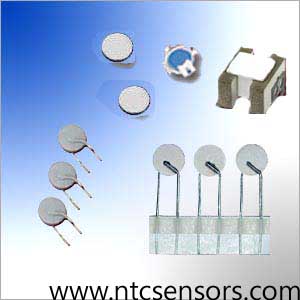