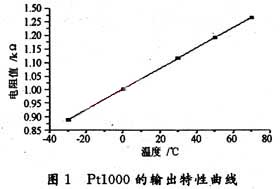 Vi, after R1 is fixed, the current flowing through RT is constant, and Vo is proportional to RT. From the change of RT, the corresponding voltage change can be obtained, thereby achieving voltage output and the linearity remains unchanged. 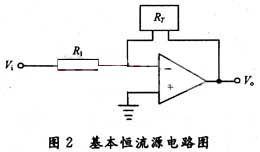 
3. Temperature Processing Circuit with In-phase Input
The ideal temperature sensing circuit has an output voltage of 0 V at 0 °C, and RT=1 000.8 Ω in Figure 1, and the Vo obtained by substituting equation (1) is not 0, so the voltage needs to be zeroed. The method is implemented by adding an input voltage to the non-inverting terminal of the op amp in Figure 2, as shown in Figure 3. 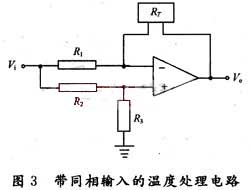 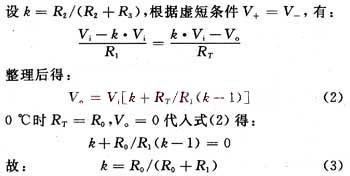 So as long as k can be adjusted to the appropriate value, the signal can be zeroed. But because this is only a theoretical calculation, the actual op amp is not ideal, and the resistance will not fully meet the nominal resistance due to the influence of temperature and the like. Therefore, the sizes of R2 and R3 are not fixed, and in practice, a variable resistor is used for fine adjustment.
The adjustment of the non-inverting input voltage makes the output voltage decrease even if the temperature rises. Therefore, in order to ensure the linear output of the signal from -300 to 700 mV at -30 °C to +70 °C, an amplifying circuit is used after zeroing. Adjust the magnification factor. As shown in Figure 4.
Figure 4 shows the inverting amplifier circuit. It can not only realize the amplification effect of A=R5/R4, but also reverse the voltage Vo1 inverted by the previous stage op amp. Meet the required positive phase voltage.

4. Linearization supplementary processing
The relationship after the op amp 1 is shown in equation (2). After linear amplification of Operational Amplifier 2, if RT is certain, Vo is proportional to Vi, so to keep linear, Vi is best a fixed value, otherwise there will be two function values of Vi and RT in Vo's function relationship, which can not accurately measure temperature. The range of voltage fluctuation given by the design is (+10%VCC) and RT is fixed at a certain temperature. Then the final Vo also has (+10%) fluctuation. Using the unified R-T relationship to judge, the temperature error in the range of measurement becomes (+10%) which can not be tolerated. The circuit must have a reliable high-precision voltage regulator. Therefore, in the actual operation of the circuit, the high-precision voltage reference MAX6025 can be used to supply components and circuits with a high-precision voltage reference.
In addition, from the relationship between the Pt1000 platinum resistance value R and the temperature T, the Pt1000 has a high sensitivity of 3.786 59 Ω/°C in the measurement temperature range, so only a general-purpose operational amplifier is required. When the temperature coefficient of the resistor used is matched, the nonlinear error can be ignored. 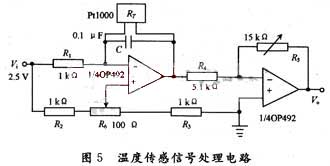 5. Actual temperature sensing signal processing circuit
The actual temperature sensing signal processing circuit is shown in Figure 5. The capacitor C in the circuit diagram is the noise reduction capacitor. The actual value is 1μF. The 2.5V voltage reference is provided by the MAX6025. According to the parameters given in the figure, before performing the actual temperature test, it must first be zeroed and fully adjusted. Use a precision adjustable resistor instead of Pt1000 to connect to the circuit, change the resistance to equal the equivalent resistance of 0 000.8 Ω at 0 °C, adjust the variable resistor R5, so that the output voltage is 0. Then change the precision adjustable resistance value to 1 265.8 Ω at 70 °C, adjust the variable resistor R6, and make the output 700 mV, complete the zero adjustment and full adjustment. The circuit has been experimentally tested to achieve a good temperature sensing effect.
Share:
PREV：Cold Junction Compensation Method for Temperature Measuring Instrument Based on Thermocouple
NEXT：Application of NTC Thermistor Temperature Measurement in Blood Glucose Resistance Instrument