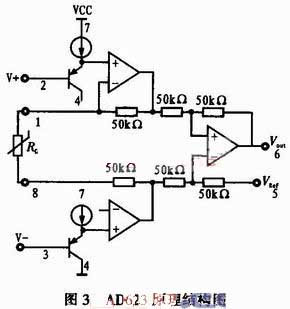 2.3 PT1000 Conditioning Circuit Heat
The PT1000 on the market has two-wire system, three-wire system and four-wire system according to the wiring form. The four-wire system has the highest accuracy, the two-wire system has the lowest, and the three-wire system is somewhere in between. In view of the accuracy requirements and the complexity of the connection, the three-wire system is adopted, and the three-wire system is adopted; This wiring method removes the inaccuracy of the zero point caused by the wire resistance.
The three-wire PT1000 has one outlet at one end and two outlets at the other end. The connection is shown in Figure 4. In the figure, the blue line is connected to the power supply, the red line and the PT1000 form a bridge arm of the bridge, and the green line, WR41 and R43 form the other bridge arm; Wires of almost the same length (green line and red line) are introduced into both of the bridge arms. When the temperature changes, the two bridge arm lead resistances increase or decrease at the same time, and the bridge zero point is not affected, which improves the accuracy.
In Figure 4, WR41 is a zero potentiometer; The output of the bridge is directly connected to the AD623 op amp.  he method of connecting and adjusting the gain is the same as in the previous section and will not be described here. When debugging, the PT1000 is realized by a resistor box, and the resistance value is obtained by the index table. 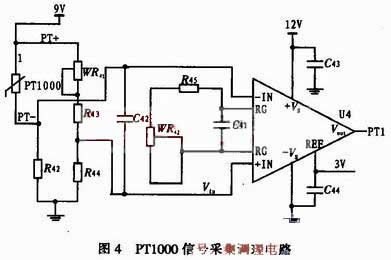 2.4 galvanic conditioning circuit
The basic principle of thermocouple temperature measurement is that two kinds of conductors with different compositions form a closed loop. When there is a temperature gradient at both ends, there will be current passing through the loop. At this time, there is an electromotive force between the two ends - the thermoelectromotive force. The higher temperature end is the working end, the lower temperature end is the cold end (free end), and the cold is usually at a constant temperature. If the temperature changes at the cold end when measuring, it will seriously affect the accuracy of the measurement. Therefore, certain measures are taken to compensate for the effect of the cold junction temperature change called the cold junction compensation of the thermocouple. 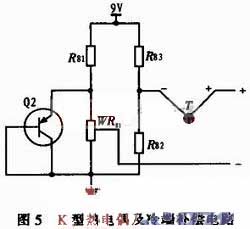 3 Conclusion
The paper addresses several different types of temperature sensor products (ADS90, PT1000 and K-type thermocouples). The power circuit, the signal conversion circuit and the amplification and up-up circuit are designed to make the output of various sensor products reach a uniform standard signal of 1 to 5 V; The thermocouple, AD590 and PT1000 were simulated in the laboratory using high-precision voltage, current source and resistor box. The results show that the relative accuracy of the conditioning circuit can reach 0.1, and the uncertainty of 0.5% can be achieved after connecting the sensor; A weight of 55 g achieved the desired result.
Share:
PREV：Application and principle of temperature sensor (thermistor, thermocouple)
NEXT：Selection and Verification Method of Temperature Verification Point for PT100 Thermocouple Temperature Sensor